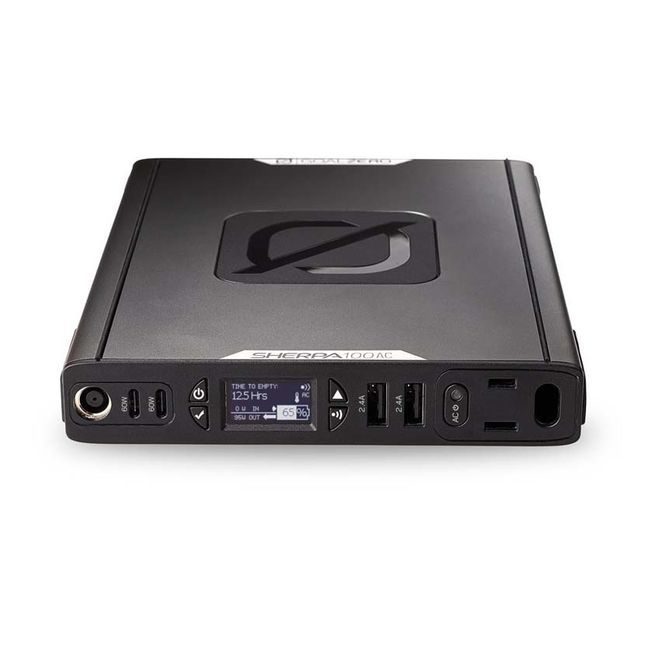 Satisfaction Guarantee
We want you to be 100% happy with your purchase! We have a 30 day hassle-free return policy and no restocking fees!
Add to Wishlist
In Stock


There are 3 ways to charge your Sherpa 100AC Power Bank:

The Sun
Recharge from the sun by connecting a compatible solar panel. Charge time is dependent on the size of the solar panel. The Nomad 28 Plus Solar Panel will fully recharge the Sherpa 100AC in about 7-14 hours.

USB
Recharge from a USB source using included cables in 8 - 10 hours. Fully recharges from the wall in about 3 hours using the Sherpa Power Supply (not included).


Related Items
Choose Items below by clicking "Select Item" for all of the Items you would like, and then click Add to Cart.

Reg. Price: $399.00
Sale Price: $369.00
Free Shipping
1641407866
Review Summary
Write a Review
5.0
5 Reviews
5
100% (5)
4
0% (0)
3
0% (0)
2
0% (0)
1
0% (0)
100% Recommend this product (5 of 5 responses)
By Charles
South Carolina
Sailboat Must Have
January 5, 2022
Purchased as a hope and see, and this power exceed expectations. We sailed from Melbourne FL to Rodriquez Key and back - 6 days, with a number of stops only on anchor. The pack provided power to 3 phones and a surface for the trip charged during the day using solar and able to watch streaming movies, listen to music and take care of email.
By Diane
Wingate, NC
Very high quality
January 18, 2020
I gave 4 Sherpa 100AC's to family as Christmas gifts. The one consistent comment from all recipients was what high quality they are. Two are thrilled that they are approved for air travel, as they have trips planned for this spring. A very solid, versatile power bank.
By kimberly r.
New York
sherpa 100 ac power bank
December 22, 2019
Awesome product.THANK YOU HAPPY HOLIDAY
By SkyKing
Brookfield, CT
Look no further: This is your go-to for THE reliable power bank
October 28, 2018
I was not compensated in any way for this review.

Now, admittedly an OCD person when it comes to "backups" of every type, I have many different "power banks" and solar panels...Although mostly Goal Zero. My place looks like a Goal Zero showroom. I tested the DJI Phantom 4 Pro drone battery against two other types of, supposedly higher capacity, power banks: The "Suaoki S270 Portable Power Station 150Wh Quiet Gas Free Camping Generator QC3.0 UPS Lithium Power Supply", rated at 150Wh and "max 100W, peak power 150W". After a few minutes of charging the DJI drone battery, the Suaoki Shut down completely. I restarted the S270 and again, after a few minutes, it shut down completely. While the S270 has several 12V, USB and 2 110V AC outlets, it does not have a Qi 5W wireless charger like the Sherpa 110AC does, not is it as compact as the Sherpa 110AC or have an informative display like the Sherpa 110AC does.

Next, I tested it against a iPrigent "Portable Solar Generator Power Source - 41600mAh 154Wh" which claims to have a 120 Watt inverter output. When I attempted to charger the DJI Phantom 4 Pro battery, it shut down in less than a minute. The iPrigent has a single 110 v output port/receptacle and two USB ports. The input port is a DC 19 volt, 2 Amp socket that charges the unit from an AC-adapter or solar panel. It lacks any "informative display" and simply states it remaining capacity with a series of 4 tiny blue LEDs.

Now back to the Goal Zero Sherpa 100AC: It is compact and high quality throughout.

For input (recharging it) it has a standard 8mm Goal Zero input receptacle and two Type C connectors, each rated at 60 Watts each. The Type C connector is 2 way so it can be used for input (recharging) and output (charging something else). It can be recharged with a 12v car adapter as well. The Sherpa 100AC has 2 USB ports rated at 2.4 Ams each, and 1 110 volt AC receptacle . It has a wireless Qi 5 Watt charging pad for phones that have Qi compatible wireless charging, as with the latest iPhones and many Android devices and tablets.

I'm a photographer, using drones, Matterport Systems and conventional still and video equipment. I almost "live" on battery and solar power. The Sherpa 100AC is now my favorite all-around device when I need its capacity. For higher capacity demands I rely on the Goal Zero Yeti 400 Lithium and Yeti 1400 Lithium. In my opinion, the Goal Zero Nomad 28 Plus is the most convenient way to charge the Sherpa 100AC when sun is available.

When you want remote or backup power, "usually reliable" is not an option. As a matter of fact, I consider "usually reliable" an oxymoron. I have found this Sherpa 100AC to be "reliable" as in "completely reliable", which is what you want. If you're considering a Power Bank of this capacity, look no further and get the Goal Zero Sherpa 100AC. I doubt that you'd have any second-thoughts!

reliable Under-promised and over-delivered Compact Powerful Quality built Pricy Portable power Camping Charging drone batteries Emergency
By Nexus T.
SC
Great Battery Pack
October 15, 2018
This Item is wonderful with the Note 9. I use it daily.
Q&A Summary
3 Questions & 3 Answers
Ask a Question
Charlie Carter
from San Francisco , CA asked:
March 29, 2020
Does it have a cable to fit my MacBook pro for charging ?
1 Answer
You would simply use the normal charger for your Macbook. Thank you for your inquiry!
Submitted by: Chris Pesce on March 30, 2020
Most Helpful Answer


Answer
Charles
from ely, nevada asked:
December 11, 2019
What is the best combination of the Sherpa 100 AC Power Pack and your portable solar panels that would be capable of charging it?  The Sherpa 100 AC and Nomad 28?
1 Answer
The Boulder 50 Solar Panel will provide the fastest recharge to the Sherpa Power Pack. Thank you for your inquiry!
Submitted by: Chris Pesce on December 12, 2019
Most Helpful Answer


Answer
Ian
from California asked:
February 10, 2019
Do you have a GOAL ZERO Sherpa 100AC form-fitting sleeve to go with this?
1 Answer
We do indeed! We carry this item however it is not listed on the website at the moment. Please contact us directly at 877-548-3387 to purchase this product. Thank you for your inquiry!

Submitted by: Chris Pesce on February 11, 2019
Most Helpful Answer