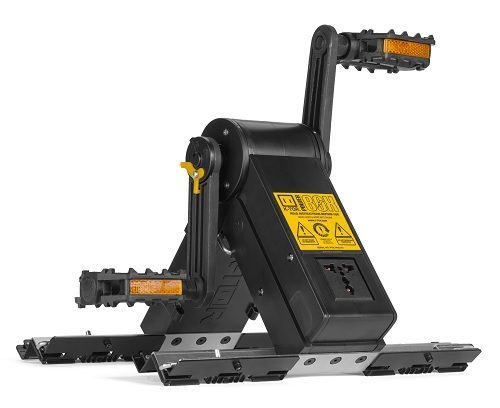 Satisfaction Guarantee
We want you to be 100% happy with your purchase! We have a 30 day hassle-free return policy and no restocking fees!
Add to Wishlist
In Stock


Unlike solar power generators that require sunlight and gas powered generators that emit fumes, this pedal power generator will provide you with power day/night minus the emissions. This lightweight, user-friendly device has 1 DC outlet you can use for cellphones, tablets, LED lanterns, mobile radios, and other consumer electronic devices.

The resistance of this bicycle generator adjusts to the load put on it, allowing it to function effectively as a physical rehabilitation or workout tool.

The K-Tor Power Box was tested on a healthy, 59-year old male with a resting heart rate of 60 and these are the results:


Despite having one outlet only, this bicycle powered generator can be used to power multiple devices. Simply use a power strip for the added convenience of additional outlets. Just make sure that you do not exceed the 20 watt maximum rating of this universal pedal charger.

Disclaimer: This product requires physical exercise to operate. Consult a physician first and ask if you are fit to use the K-Tor Power Box. Earthtech Products and the manufacturer of this pedal power generator will accept no liability from loss of use, injury or direct or consequential damages as a result of the use or inability to use or failure of this product.
Specifications
F.A.Q.'s
Frequently Asked Questions:

Q: What products are compatible with the K-Tor Power Box?
A: This pedal power generator can be used to power a wide range of electronic devices and other electronics that consume no more than 20 watts of power, including but not limited to cellphones, tablets, LED lanterns, mobile radios, DVD and music players and GPS devices.

Q: How many devices can it power?
A: This portable pedal generator has one DC outlet and can power only one device in a given time. However, it can be used to power multiple devices simultaneously by using a power strip. Just make sure that you won't go over the 20 watt maximum rating.

Q: Can I stand on the pedals of this universal pedal charger?
A: No, you can't.

Q: Can I mount it on a wooden base?
A: Yes, you can. This pedal battery charger for cellphones other electronic devices has mounting holes in the generator feet which you can use to screw down or stake down this product on a more stable base.


Now that we setup the Power Box, and of course you use it with your hands, but it's really designed to be used with your feet, and it's very easy with your feet and you can pedal for long periods time with your feet. It is very important that it's on a stable surface and doesn't move around. We currently have it setup to charge two things at the same time: a tablet and a cellphone. This is done by using a simple extension cord. Start pedaling, come up to speed quickly and establish a normal rhythm at one and a half cycles per second.

One of the great things about the Power Box is because you can pedal for long periods of time, it's very versatile. You can use it to charge external batteries and of course, there's a wide range of sizes of 12-volt batteries, and you can run many things directly off 12-volt. But you can also run an inverter off of a 12-volt battery and you can run pretty much anything that you can't run directly. So for example, we have a full-sized laptop here plugged into this inverter and I also have an electric fan.

Reg. Price: $399.00
Sale Price: $369.00
Free Shipping
1391795304
Review Summary
Write a Review
4.0
2 Reviews
5
0% (0)
4
100% (2)
3
0% (0)
2
0% (0)
1
0% (0)
100% Recommend this product (2 of 2 responses)
By Alex
Stanford, CT
Neat Backup charger
February 7, 2014
I have been interested in this for a while so i decided to bite the bullet and buy it. Its very simple to use but i recommend bolting it down like they say in the instructions, otherwise it moves/ tilst up. Much easier to pedal than use the smaller hand crank version.
Doesn't require the sun to charge devices Would like more resistance in the pedal.
By Julia S.
New York, NY
Using feet is so much better than arms
October 21, 2013
The idea is a vast improvement over trying to crank 90 RPM with a hand held version. My arms would get so tired it was nearly impossible to keep going. The pedal version is definitely better because of the obviously stronger leg power. The one thing that I would say that would make this work so much better is the addition of a gear, so that you don't have to physically spin your pedals 90 rpm -- a gear that allows you to spin anything less, such as 45 or 60 rpm, while the gear transfers the speed to the charger so it turns 90 rpm would be a lot easier.

The reality is - spinning 90 rpm with your feet on the pedals takes a lot of energy and concentration, it's practically the equivalent of sprinting, and you can't do it "mindlessly", as soon as you think about anything else and try to let your body go on auto pilot, your legs slow down to just a little less than 90 rpm, and I presume that it just doesn't charge much or at all at that pace (I noticed my charging light wavering when I slowed a bit).

It's just hard to keep up a non-stop sprint pace for 10-15 minutes or more, and the actual resistance isn't that hard (way better than with your arms), it's just the speed is tough to keep up.

I assume that an extra gear to translate the speed would add a bit of size, weight, and cost, but I would pay it. It would make the whole thing much more effective.


easier to spin with legs and arms hard to keep up 90 rpm for as long as it takes to charge a device or battery blackouts and power outages, possibly camping the amount of charge you can accumulate realistically would not be much more than your phone, flashlight, maybe a radio etc. but you'd end up being very judicious about using those devices because of the difficulty in keeping up the 90 rpm for the 10-20 minutes or more to charge those devices.
A Specialty Co. Since 2006!
Free Shipping Orders over $99. Ends 2/7.
1-877-548-3387
M-F 9AM-5:30PM EST
Top