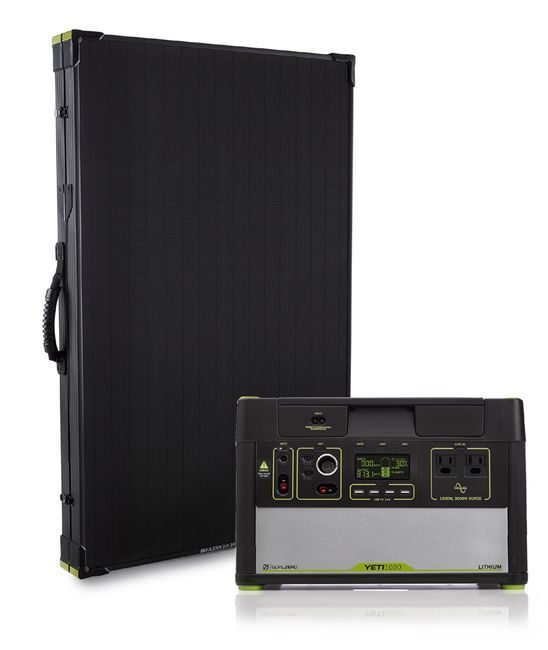 Satisfaction Guarantee
We want you to be 100% happy with your purchase! We have a 30 day hassle-free return policy and no restocking fees!
Add to Wishlist
Out of Stock
Availability: Pending Manufacturer Feedback

Write a Review
Ask a Question
Item Code: VKY1000B200BC
Ship Weight: 82 lbs.
Regular Price: $1,899.90
Sale Price: $1,699.90
You Save 11% ($200.00)
Notify me when this item is back in stock
Availability: Pending Manufacturer Feedback
Free Shipping On this Item Expires: 6/22 *Contiguous United States
Product Details
Specifications
What's Included
Video
Related Items
Product Details
From lights to laptops, refrigerators to power tools, run all your devices with the clean and quiet Goal Zero Yeti 1000 Lithium Portable Solar Generator Kit with Boulder 200 Briefcase. Designed to be the most versatile and innovative power station on the market, the Goal Zero Yeti 1000 features a patent-pending 1500W AC inverter designed to tackle any job, both indoors and out. No more extension cords, no more gasoline, no more fumes- simply put, the Goal Zero Yeti 1000 Lithium Portable Solar Generator Kit with Boulder 200 Briefcase creates and outputs dependable power at the push of a button so you can power anything, anywhere.


Best-Use Strategy: When charging gear with the Yeti 1000 Lithium, take note of the LCD Battery Display. If you plug in devices that have a high power requirement (a large refrigerator), the charge level of the Yeti can drop very quickly and you may not get exactly 1000Wh of energy. Also, especially when using the AC power output, the Goal Zero Yeti will be converting the energy from the DC power of the battery to the AC power needed by your device. Although your Goal Zero Yeti has a highly efficient inverter, there is still some energy lost in the conversion and you will not get the full rated capacity of the battery.

There are 2 ways to charge your Goal Zero Yeti 1000 Lithium:

The Sun
The Goal Zero Yeti 1000 Lithium can be charged by connecting the included solar panel.

Wall
The Goal Zero Yeti 1000 Lithium can be recharged from a regular wall outlet in about 18 hours. You can charge your Yeti with solar panels, and a wall charger at the same time. The Goal Zero Yeti 1000 Lithium Powers your devices in 3 ways:

USB
4 high-speed USB ports (2.4A). Great for your phones, tablets, and wearables.

AC Inverter
Plug in your device just as you would the wall. There are two AC Outlets (pure-sine wave, 1500W, 3000W surge) • (1) GoalZero Yeti 1000 Lithium Generator
• (1) Boulder 200 Watt Briefcase Solar Panel with Kickstand
• (1) Boulder 200 Solar Panel Carrying Case
• (1) AC Wall Charger
Video
Related Items
Choose Items below by clicking "Select Item" for all of the Items you would like, and then click Add to Cart.